Fat is king when selecting meals for a ketogenic diet, and if you're new, you may be wondering is sour cream keto friendly?

The term "keto" is an abbreviation for the ketogenic diet. The keto diet is a high-fat, extremely low-carb eating regimen that compels your body to use fat for fuel rather than glucose. The first guideline of keto is to consume relatively few carbohydrates and choose meals rich in fat. You may be unsure whether sour cream fits into the keto diet or if it contains too many carbohydrates like some other dairy products. This article examines the ingredients in sour cream. It discusses whether or not you should consume it when following a ketogenic diet.

How is sour cream made?

As the name implies, sour cream is created from cream that has been soured by an acid, most often lactic acid bacteria. Sometimes other acids like lemon juice or vinegar may be used in the recipe. As the bacteria multiply, they thicken the cream and give it a yogurt-like sour, acidic taste. The cream used to make standard sour cream must have at least 18% milk fat.

But you may also get low-fat sour cream, which contains at least 25% less fat than the original, full-fat version. Another choice is nonfat sour cream, which has 1/2 a gram of fat per 1/4 cup serving. It's crucial to check the labels when contemplating sour cream for a ketogenic diet since as the fat percentage declines, the carb amount rises.

Fat is responsible for the thick, silky texture of regular sour cream. Manufacturers frequently add thickeners, gums, and stabilizers such as maltodextrin, maize starch, guar gum, and xanthan gum to produce the same texture and mouthfeel without fat. Given that these components are made of carbohydrates, they may somewhat raise the carb content of low-fat sour cream. As a result, you will dramatically increase the carb content of nonfat sour cream.

The cream is standard sour cream and has a low-carb and high-fat content. On the other hand, nonfat sour cream is fat-free and includes additives that significantly increase its carb level.

The ketogenic diet has been used for at least a century to help epileptic children with fewer seizures. However, it has gained popularity since it may help people with metabolic problems lose weight and improve their cholesterol and blood sugar levels. According to a study of 307 participants, the diet may also lessen cravings for carbohydrates compared to low-fat diets. It works by putting your body into a ketogenic state, which causes you to use ketones, a byproduct of fat, for energy instead of glucose.

To make the changeover, you should only consume 5% of your total daily calories from carbohydrates and up to 80% of your calories from fat. Protein makes up the remaining calories in your diet.

It's critical to adhere to your carb and fat objectives, determined by your individual calorie requirements, to enter and maintain ketosis. A 2,000-calorie diet, for instance, would require you to consume 25 grams of carbohydrates, 75 grams of protein, and 178 grams of fat per day.

Because they include too many carbohydrates, fruits, grains, starchy vegetables, and dairy products like yogurt should not be included in meal plans. One medium-sized piece of fruit, half a cup (117 grams) of cooked oats, or six ounces (170 grams) of yogurt, each including around 15 grams of carbohydrates.

On the other hand, consuming fats like butter and oil is recommended. They are primarily fat and either has no or minimal carbohydrates. Regular, full-fat sour cream is keto-friendly since it is much closer nutrition-wise to fat than it is to a carb-based item. If you choose to eat a serving of nonfat sour cream, you'll consume around the same amount of carbohydrates as you would by eating a piece of fruit. It's very probable that you'll be eating too many carbs for a ketogenic diet.

A ketogenic diet may provide health advantages, including weight reduction and better metabolic function. You need to consume minimal carbs if you want to adhere to them. While nonfat sour cream will probably be too rich in carbohydrates, full-fat sour cream may be used on a ketogenic diet.

Sour Cream with the Ketogenic Diet

There are several methods to use full-fat sour cream in dishes suitable for the ketogenic diet. It makes a delicious, creamy basis for a dip. Combine it with herbs or spices like curry powder as a vegetable dip. Additionally, sour cream increases the fat level of a leaner protein meal while creating a delightful, tangy cream sauce for pan-fried chicken. In a skillet with olive oil, cook a few tablespoons of chopped onion and a clove of garlic to form a sauce. 60 grams of full-fat sour cream and enough chicken stock to thicken the sauce should be added. Sour cream sauces should not be fully brought to a boil since doing so will cause the sour cream to separate.

The cream is used to make regular, full-fat sour cream with a far higher fat content than carbohydrates. As a result, it is regarded as keto-friendly, and Low-fat or nonfat sour cream is not however.

When added to recipes to increase the fat level or used as a foundation for dips, full-fat sour cream may provide some variation to a keto diet.

It would be best if you were careful to include them against your daily carb allotment since it does contain some carbohydrates.

For more, check out some of our sour cream keto recipes here!

08-10-22
Do you feel hungry on your keto diet with your next meal hours away?

What Vegetables Are Keto Friendly?

What Are Keto Pills And When Should You Take Them, Morning Or Night?

END_OF_DOCUMENT_TOKEN_TO_BE_REPLACED 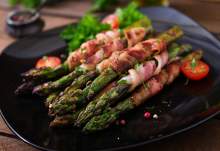